We invited a farmer “teacher” and his wife over for dinner to discuss new possibilities for local food in our community.   The farmer’s wife had been to a library sale and picked up the first four editions of Foxfire Books just because she thought I would like them.  It wasn’t until summer had gone and winter had set in that I was able to pick them up and read them.  What I found was story after story of how a community was changed when they recognized the valuable gifts they were able to offer one another.   The stories were about real people with abilities to make or create things that others found useful.  This led me to ask, “What happened to community in the first place?”  Was it the introduction of transportation, televisions, or mobility due to school or jobs?  It seems that whatever the cause, the deep sense of community is something that takes a lot of work to find.  And progress and monetary gain don’t seem to be the solutions we thought they would be.  Maybe, just maybe, the act of giving is the key to finding what is most meaningful in our lives. 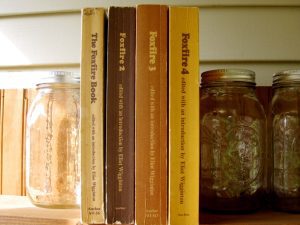 These books were given to me by a friend (because she thought I might like them) and what’s inside has taught me to see the stories behind the ordinary people who surround us.  To value what can be bought locally from those who have worked hard to learn skills that make, grow, prepare, and develop the things that are useful in life.  I’ve learned to value what we are able to grow for others while finding joy in giving things away or asking for things when I find myself in need.  I’ve found that the relationships developed from this circle of giving and receiving cannot be bought in a store.
In the not so distant past people depended on one another.  Community was a way of life and our need for the farmer and the seamstress allowed us to build relationships around the objects in which we made trades or financial commitments.  This seems to have been replaced by a system where everything and everyone are replaceable.  If something breaks we just buy another one.  If the store doesn’t have something we want then we just go somewhere else.  It seems that if we lost community when we didn’t need one another anymore that maybe it’s possible to find it again through what some call the circle of gifts.

When I decided to change from being a full-time career woman to a work-from-home mom, I was thrust into the need for community in my life.  I’d say that need was always there, but the overwhelming loneliness I felt when I spent days alone with my one- year-old gave me lots of time to think about what life would look life if I was more dependent on others, and likewise if I could make myself useful to my friends, community, and those in need.  As I have been involved in the BabyNet Community that has developed in south central Kentucky, I’ve learned that the giving and receiving of gifts is a key component to developing meaningful relationships.  I’ve witnessed parents come together via facebook and monthly meetings with the sole focus of sharing experiences.  What has allowed this group of more than 700 members to thrive in a world that often leaves us tattered and worn?  I believe it’s their willingness to share with one another.  A mom shares her need for a sitter, cooking advice, or a day at the park while another offers things that she doesn’t need such as clothing, cloth diapers, or coupons.  The exchanging of gifts is what unites them and allows for face-to-face connection.  They know one another’s names and care about each other’s’ children.

We aren’t quick to alienate those people on whom we are dependent and with whom we develop authentic relationships.  The witnessing of this giving, in return, encourages us to do the same.  I want to surround myself with others who are generous because it increases my selflessness and encourages me to depend on others.  A group of chickens and a pair of shoes are exchanged for work experiences on our farm.  Excess produce in my garden is traded for dresses my girls love to wear.  It’s not forced and no one expects anything in return, but rather we all find joy in spreading our wealth.

In doing some research on this idea of the circle of gifts, I found a group in California that meets weekly to replicate a time-honored ritual of meeting each other’s needs.  The members of the group stands or sits in a circle and take turns going around the room to express their needs and gifts they have to offer.  One by one a need is met by the generosity of another in the room.   Similarly, I’ve seen this with the BabyNet group as they’ve met at a farmers market to exchange a stack of too large men’s shirts or jars of canned fruit.  There becomes an acceptance and dependence on one another that is not often seen.  Beyond physical gifts, the group shares knowledge with one another as they meet for monthly meetings on topics that relate to parenting a child.  Like what happens in the meetings in California, parents involved in BabyNet are connected because they know that they will have this sacred time once a month to discuss their needs and share their knowledge with one another.  Trades, sales, and gifts have naturally become an important aspect of these monthly gatherings.

Women gather in a circle – photo via George Eastman House Collection. (right) Parents and professionals gather in a circle at the monthly BabyNet meetings held at the WKU ALIVE Center.
I’m humbled as I look at a gift given to me by my daughter.  It’s a drawing very similar to every drawing she creates for me:  a stick figure version of herself standing next to a stick figure version of me doing something simple like baking, working in the garden, or having a picnic.  This gift she gives me reflects what matters most to her, not a toy or a new dress, but my time and energy devoted to simple moments between the two of us.  In the Foxfire Book series, the students in author Eliot Wiggington’s class realize this same thing about the community of mountain people who had so much to offer, but were quickly losing people who cared.  By simply spending time with them and watching them create their gifts, the gift of knowledge was received and could then be passed on to others.

It appears that a financial peak has been reached (at least for our lifetime) and that a gift culture might be one solution to handling difficult times.  Those living in a gift culture pass on their excess rather than allowing it to accumulate or be thrown away.  Our wealth begins to circulate rather than leaving many with unmet needs.  It occurred to me that this is why those living in the greatest poverty often have the most meaningful relationships.   When we are purchasing locally and living more simply, we begin making better purchasing decisions.  We find ourselves as consumers of items with less packaging and of higher quality so it lasts longer.   The less money we spend, the less time we are required to work, and this allows for more time to care for one another.

The increased momentum in the buy local movement seems to be drawn to this sense of knowing your producer.  It allows us to be more than consumers, making us participants in a system where creativity replaces over-consumption. When you build a relationship with your farmer, she may not have exactly what you need right now, but you can make a request for it to be grown the next year.  You can buy one- of-a-kind clothing that was made with artistic expression and creativity rather than being mass produced.  Even though money is exchanged, the item becomes of greater value because of the relationship that is developed.   When you buy food or a gift from a homegrown business, you are helping a family you know pay bills, a college student pay off loans, or a newlywed couple live out their dreams.  You build connections and make an immediate difference in someone’s life, and they do the same for you.