Fencing, water witching & never give up your shawl

I wrote about my grandmother Grace and I’ll continue to share more about her.  We have such a connection that was known when she was alive and becomes more solid as I get to know her by the items she chose to keep over time and the words she penciled in journals and on recipes.  Those items that best define who she was.  I ponder this as I determine which of my items tell my story well enough to be placed in 100 crates. 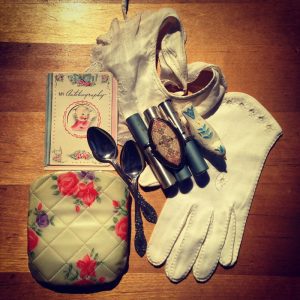 There is a spirit which I feel as I read her notes and finger her most prized possessions.  Hurt as a lost baby’s things get tucked into a bag, items that made her feel beautiful, her apparent desire to feed her family well.  We’re finding so many things tucked into the woods and ground of our new farm.  We’re fortunate to have the best fencer around doing some fencing for us and as the first posts go in I keep thinking about the buried fences we found on our many farm visits over the last three years.  I wonder who might find this fence-so intentional and with purpose now-buried deep within the woods someday. 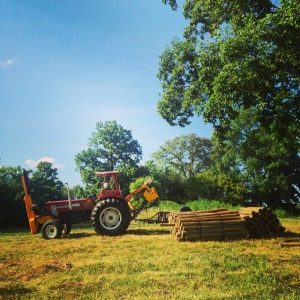 The best fencer around’s daughter is one of my grammarly friends and she paid me the best compliment asking me to write-in the way I do-about our experience with water witching on the farm.  This is a pretty big deal for this girl who didn’t even know how to read and write until well beyond the appropriate age and writes with feeling rather than grammar, but here goes.

water witching (dowsing):
Dowsing is a type of divination employed in attempts to locate ground water, buried metals or ores, gemstones, oil, gravesites, and many other objects and materials, as well as so-called currents of earth radiation, without the use of scientific apparatus.

Before modern water systems were put in at the farm the families who lived here walked down to a spring in the woods-this meant that there wasn’t a well on the property.  In order to be more efficient and save we’ll be putting in a well in time for the animals and fall crops who will need it.  I’m not sure how Nathan came across someone to water witch for us, but as normally happens, he casually mentioned to me one morning before heading out the door that he was meeting our “water witch” to determine the best place for our new well.  This will go into the “city girl meets country boy” file, for sure.  I’m not sure what I was expecting, but I’m guessing it’s what I have seen in the movies.  Maybe a Turtle Man look alike carrying humongous tree limbs exaggerating each step across the farm.  Instead, I was greeted by a gentleman who looked dress for a round of golf carrying two tiny sticks-they wouldn’t have even held up a marshmallow for roasting.  He walked and talked and carried the tiny sticks around until he finally said, “well, you pretty much have water all over the property-so put the well wherever you want to.”  Not the dramatic well witching story I was expecting, but you can be certain we will have plenty of drama along the way.

The best fencer around’s wife loves history and on the first night of fencing she was reading a historic document from the Simpson County Historical Society that references our new home because of the civil war soldier buried there-Sgt. Joseph W. Richards.  One of the sections she sent over makes me smile every single time.

The guerillas had rifled the bureau drawers, taking what they wanted.  One of them seized a big shawl which Mrs. Barnes was wearing.  A lady of great courage and determination, she held on the shawl and wouldn’t let the man have it, whereupon he threatened to shoot her if she didn’t give it to him.  To that she replied, “Well, go ahead and shoot.  You won’t rob me of many days.”  Another of the raiders said, “aw, let her have it.”  So she kept the shawl.

Makes me wonder if she wanted to keep her shawl for warmth or because it would be the only thing left of her once she was gone.  Did someone keep the shawl in remembrance of her feisty spirit telling that story over and over again?  I bet my grandmother would have been one of those women who wouldn’t have given up her shawl…and I hope in my old age I’m one of those women too.