Inviting Mama’s to the Table

There are so many memories I carry with me from our trip to Honduras last year, but one has stayed with me day after day.  In the airport-waiting for our flight- we were desperately trying to feed ourselves a combination of McDonalds and local airport fare.  While I wrangled our four kids in a very crowded seating area there was a woman behind me engaged in what appeared to be deep, meaningful conversation with a large group of men and women.  The conversation was passionate, loud and I was intrigued.  The woman was at the table, contributing and breastfeeding her baby.  And I’m not talking breastfeeding with a cover over the babies head.  The baby appeared to be about 9 months old and would latch, unlatch, play with things on the table and then go back to finishing her lunch-the entire time the mothers breast was exposed.  No one was offended, awkwardly looking away or concerned.  It was normal.

After struggling through becoming a mama for the first time-and then again and again-I realized that there are a lot of obstacles out there for moms, babies and families.  But one of the biggest challenges may just be that we stopped inviting mama’s to the table and to the meaningful conversations that impact them the most.

Do women breastfeeding in public offend us because there is a breast involved?  Or could it be that at some point in history we decided that women who are breastfeeding their children should just stay home?  Did the fear of being left out of the conversation and unable to contribute to society allow formula companies the upper hand in marketing themselves to our insecurities, consumer driven, overworked selves?  I think it’s time that we think this through and take advantage of what empowered mama’s have to offer our communities.  Because let me tell you-there’s nothing like a passionate and empowered mama to get things done.

Our bodies were beautifully designed to be nourished by breastmilk.  It is full of nutrients and antibodies that newborns need.  It’s the perfect combination of fat, sugar, water, and protein.  The cells, hormones and antibodies help babies grow up healthy and fight disease.  It’s good for mama’s too-lowering the instances of type 2 diabetes, breast cancer, ovarian cancer and postpartum depression.  Research shows that if 90% of families breastfed exclusively for 6 months, nearly 1,000 deaths among infants could be prevented and the United States would save $13 billion dollars a year on medical costs.  That’s my public service announcement in order to convince you-in case you need convincing.

After my fourth baby was born I was determined (and encouraged) to have my voice heard.  So I started showing up-with my baby- and when she was hungry, I fed her.  And you know what I found out?  People cared about what I had to say.  Especially those who work in public health.  One of the first things that the surgeon general  did in her new role was to release a call to action to support breastfeeding.  Laws have been put into place that allow women the right to pump at work and breastfeed in public.  Doesn’t it seem odd that we had to create laws to protect women and babies in public?  Think about this for a moment. 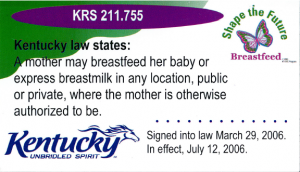 A lot of work has been done locally to raise awareness of the importance of breastfeeding.  My friend Dana is the Breastfeeding Coordinator for our region and has done some awesome work building partnerships that have strengthened the success of women breastfeeding.  The BabyNet KY group as well as the Big Latch On are both tools for offering connection, support and mentoring.  One of the biggest barriers that women face to successful breastfeeding is the fear of public nursing.  It starts at the hospital when family comes to visit and continues as they fear their first public appearances.  There’s nothing like sweating bullets in a public setting hoping that you can pull off discreet nursing.  Being a mama is hard enough without worrying about something as basic as feeding our children offending those around us. 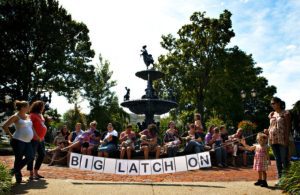 photo by Miranda Pederson, BG Daily News
My experience in Honduras combined with the work being done locally has got me thinking a lot about how far we’ve come from what was originally intended.   Most importantly, I think it’s time to invite breastfeeding mama’s back to the table and into everyday public life.  Welcomed in our restaurants, at the board meeting, churches, public spaces.  Engaged in conversations about society, health, community, rights and our future.

My friend Dana and I are thrilled to be working with Local Food For Everyone, Buy Local Bowling Green, Kentucky Public Health, and local, independently owned businesses to help normalize breastfeeding. We put up our first international breastfeeding logo at Community Farmers Market Bowling Green and will continue with additional breast feeding friendly environments over the next couple months.  Together, we can make breastfeeding normal again.