January 21 {The Making of a Farmwife}

At some point in the last century we began respecting a woman’s role in the home less and less. Her role in keeping the home and child rearing of course, but also her ability to contribute to the basic needs of her household through hard work, creativity and marketing/trade. In the farming household particularly women were encouraged to enter the workplace in order to earn extra income, retirement and insurance. This only encouraged farmhusbands to depend on simplified commodity crops for household income. We’re learning more and more that a woman’s intuition, connection and consumer mindset is instrumental in helping farm households move into the production of fresh, wholesome foods that can be sold to one’s neighbors.

Right out of college Nathan and I were hired by the University of Kentucky to assist tobacco farmers as they transitioned to new crops-mostly fruits and vegetables.  We called those specialty crops professionally, but now here on our farm we just call them-food.  More than once we sat at the kitchen table with middle aged couples who were desperately-clinging to family photos and memories of their lives there on that farm-hoping to find something that could replace the income they had become dependent on for generations.  The wife would often be cooking up dinner and serving me tea, introducing me one by one to her neighbors, church goers and community leaders through photographs and stories.  The husband would be looking at numbers on a paper and talking about cash flow.  When the wife would chime in with an idea or two on marketing their product in new (old) and innovative ways she would quickly be quieted as the conversation returned to inputs and acreage.  The desire to make things work out on paper overshadowed the real opportunity that was present.  Opportunity floated away. 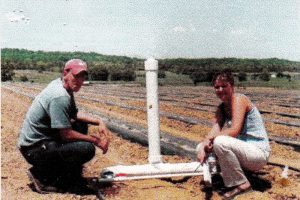 Almost all of these women were working off the farm in order to make ends meet (and maybe even to escape a space that didn’t offer them respect).  I would later identify with these women as I became a stay at home mom.  I wanted nothing more than to raise competent, compassionate children and felt that if I could bond with them early in life and teach them values and hard work that would be possible.  But creating a new identity for myself was a long difficult process.  All I had ever known was making good grades, graduating, getting the best job possible, climbing up the corporate ladder.  There were so many new skills, values, and truths for me to learn-they would shake up my entire life.

In the beginning, I just kept myself busy.  Yoga classes, library time, play dates at the park, laundry, shopping at target.  My busyness allowed me to ignore the inner callings that were upon my life, but in the quiet moments or middle of the night they would float up into my conscious and open up wounds that were hard to face.  I tried to find my way through a few “work at home gigs”.  Selling scrapbook supplies, baby items on ebay, and later diving into wedding flowers I worked through how to use the skills that I both understood and enjoyed to possibly make a bit of income for our household economy.  I was lucky when I would break even.  None of these things ever seemed exactly right and I often felt like there was a huge divide between Nathan and I-there seemed to be something else that I could be doing to serve him rather than just cleaning his home, making his food and raising his children.  This time was not wasted as it prepared me for what was to come, but it never felt like it was enough.  We both knew how to respect my strength, wisdom, contribution when I worked outside of the home, but neither of us knew how to do the same when we were working together-at home. 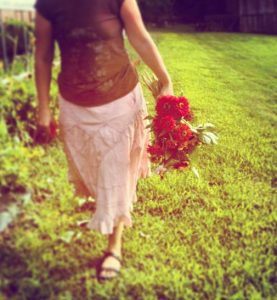 In order to make ends meet Nathan started selling heirloom tomatoes at the local farmers market.  To be honest, I didn’t feel comfortable shopping at the local market at first.  Over time I connected in deep meaningful ways to a few farmwives who took me under their wing, taught me, fed me, believed in me.  I admired their hard work, determination and strong voice.  It was time for me to find that in myself in new ways.  This person I was becoming scared both Nathan and I-and we both doubted the future.

We struggled through some very dark times in those first few years.  I desperately wanted to contribute, but I would go out into the fields only to be called back to the house by a little one who needed me.  I would sift through the beautiful Baker Creek catalog trying to make suggestions on heirloom seeds only to select plants that didn’t produce a lick of fruit.  I’d try to help out at the market, but my attention span and desire to have meaningful conversation with as many people as possible left Nathan alone at the booth.  My first CSA experience was a great learning curve and something the kids and I did together, but it became apparent that I needed Nathan’s know how and strength to farm for profit. 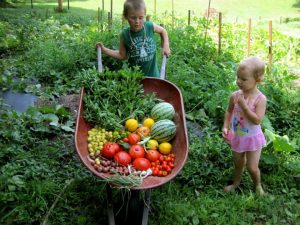 So here is the climactic point of the story.  All of these experiences lead up to this point in our home, marriage and individual lives.  We were both entering burn out.  Nathan was trying to balance all of this including his full time job and he was worn out and more irritable than normal.  I was spending so much time in the community focused on food access and birth rights that my own family was depending on pizza delivery.  I realized what a luxury it had been for me to spend so much time traveling from farm to farm to gather my food in the past, but that wasn’t realistic anymore.  Something had to change, but we had no idea how to make that happen.  I’d like to say we figured it out over dinner and moved on, but the reality is that what happened behind closed doors got ugly.  We had to work through generations of gender roles, expectations, selfishness.  We cried, yelled, got silent and yelled some more.  It was a very isolating experience, but one that was necessary for us to break free from what had been holding us back to the life we really wanted to live.

It was clear to me-we had helped build the local food system and what households in our communities needed were community supported agriculture programs that met their unique circumstances.  I knew that Nathan could grow the product and I could sell it. Just like those women at the kitchen table trying to replace their tobacco crops-I knew the people in my community by name and I had ideas on how to help them consume healthier foods in ways that worked for their unique families.  There was opportunity I didn’t want to see slip by.  At the same time it was very clear to Nathan-that we really would Need More Acres, it would be a whole lot of hard work, it would require more financial sacrifices and that we would once again be opening ourselves up to the obstacles of farmer competition-that we were desperately trying to avoid.

Our conversations moved into ways that Nathan could lead and protect me while also offering me respect and dignity.  I was learning to offer the same to Nathan while becoming a helpmate without resentment.  In retrospect, it’s my creative optimism and Nathan’s cautions realism that allows us to work together so collaboratively.  The same things that had held us back and tore us apart were what were now allowing us to work together and move forward.  Our differences needed to be named and respected.  We were both right.  And over time the arguments grew shorter and clear communication became more common.    We were both learning to redefine the word-farmwife.

In April 2013 we began farming full time.  I’ve learned to put community work on hold when something needs to be done in the field and Nathan has learned that connecting to our consumers in meaningful ways increases their success to supporting local farmers.  We’ve learned to find value in all the pieces that make small scale farming successful.  Yes, it’s the breaking ground, planting, harvesting and going to market.  But it’s also so much more.  It’s the teaching of our kids and the preparation of our food.  It’s creating a home environment that fills us back up.  It’s story telling so people understand exactly what it is we are doing and how they can get engaged.  It’s advocating and speaking truth in order to break through all the fear, corruption, and broken systems that do not support local economies.  It’s mentoring others and opening up our home.  It’s creating opportunity for as many people as possible to have the opportunity to make a good, hard earned living for themselves and/or have access to fresh food.  It’s collaborating, negotiating, and working through anything that comes up and stands in our way.  The farmwife helps see the importance in all of those things and either takes care of them on her own or calls attention to them when necessary.  Her intuition and compassion for safer, healthier, peaceful communities that helps her see the little things that when ignored become the barriers.

The solution for connecting farmers to consumers with real food won’t be accomplished by going bigger, better, and more efficient. From the beginning we were connected to our food supply through hunger, hard work and common sense. Those same things can help us to slow down, take the time to know our farmer and/or consumer, and make real changes that are not only realistic, but also inclusive to everyone in our community.  The role of the farmwife was once replaced by the hope of commodity crops and emerging grocery stores with their never ending aisles of processed food.  I’m hopeful that my story, my voice, and my work will help bring us back in at least small ways right here where I live.  When I ask my daughters to define what a farmwife does they use words like work hard, speak, go to meetings, help daddy, make food, send emails, think of new ideas, pray hard.  I’m honored to be my family’s FARMWIFE. 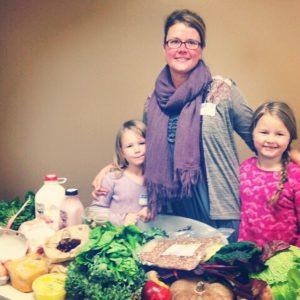