Sacrificing success for something better 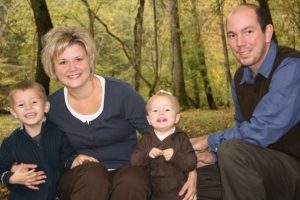 I was standing at the checkout lane the other night and spotted a People magazine featuring a story on Garth Brooks-who 14 years ago gave up fame in order to become a stay-at-home dad.  Not realizing it at the time I think that his decision influenced me in a very meaningful way that carried into decisions that Nathan and I would make once we had children of our own.  While I can’t remember the exact quote-and there were others that have said the same-I do remember an interview from Brooks when he made the announcement that said that he wanted to be an old man that can look back on his life with no regrets.  That stuck.

Our decision for me to quit what was once my dream job in order to be home with Carter came after months of recovery from what was in all reality just very poor communication as a newly married couple.  We were in California-just a couple months after our own wedding-to celebrate the wedding of one of my dearest friends.  Out to dinner Nathan casually mentioned what I thought about being a stay at home mom someday.  I responded, “There’s no way I could do that.  I’ve got a college degree.  And realistically I make more money than you.  How in the world could we ever make it work?”  He nodded and shrugged his shoulders which led me to believe that he agreed.  It wasn’t until after our first child was born the next year that we brought the conversation back up.  After a few weeks of sleeplessness, arguments and blaming we finally settled in on a conversation that revealed that both of us were just being agreeable during that brief conversation a year before and neither of us meant what we said (or didn’t say).  Talk about a moment in time robbing you of your future.

We decided to take a vacation together and set aside time to talk more about the possibility that I may quit my job as the landscape manager for the city of Bowling Green to be at least partly a stay at home mom.  No matter what we tried it didn’t make sense on paper-but I couldn’t ignore the calling on my heart that we could make it work.  We immediately thought that we would have to sell our home and 12 acres and most likely move to a neighboring county living in as small as a house as we could manage.  The day that Nathan put the For Sale sign out in the yard was the day that we felt a sense of relief at for the very first time being obedient to God.

To make a long story shorter God had a plan that was bigger than we could have dreamed.  He worked it out for us to sell 10 acres of our land so that we could stay in our home-this provided the opportunity later for us to begin farming full time.  The next several years were filled with one decision after another to give up success in order to choose something better.  I took up doing wedding flower design for national magazines including BRIDE and Martha Stewart as well as being contracted by a local florist to do some of the most amazing weddings in Bowling Green.  Opportunities began coming my way and before I knew it I was away from my family more and more.  I had to make the decision that the gift of floral design (just as my previous career) was offered to me for a brief amount of time so I could help provide for the financial means of my family-nothing more.  I had to take a pass on what others would think are amazing opportunities.  I had to watch others step into the opportunities I had first dreamed.  It was and is still hard.  I face my pride each and every day.

Nathan has had to do the same over and over again himself.  He’s brilliant-in a very unassuming way.  His friends tell the story of the day he was announced as valedictorian and everyone around him was shocked.  He laughs because he knows all the assumptions that others make about him-and he takes it with a grain of salt-and humor.  He received a 3.98 grade point average from WKU in a double major-Agriculture and Economics.  His academic career could have gone as far as he could have wanted, but he made the conscious decision time and time again to make sacrifices in order to serve his family and community.  He does so in the most humble and considerate way-seriously, I’ve never met such a humble human being.  The complicated and challenging systems of growing that he manages on our farm seems so easy that others often attribute his success to his brawn over his brains-and he just allows them to continue thinking so.  In addition to wanting to be a present and engaging father he realizes that using his 12 years of academic and research experience to make year round farming for a complex combination of farm models successful will do the most for the future of full time farming in Kentucky-than it would for him to have continued in academics.  While he never says-I’ll assume that there are days where he faces what he’s given up too.

I mention all of this because I think it’s important for us to share our stories of sacrifices-as reminders that we live in a world of temptation and opportunity that can rob us from our best life.  To choose quality of life over success, money, retirement-just doesn’t make sense and it most certainly wasn’t taught to us in school.  Every time Nathan and I made the decision to sacrifice an opportunity for our family we were tempted in ways that often left us wondering if we were making the right decision.  Right before I put in my resignation with the city I was offered a pretty significant pay increase.  Opportunities for wedding flowers that I knew would never be available to me in the future had to be given up.  As soon as Nathan made the decision to farm full time opportunities that he had once dreamed of were being offered to him.  Even now-we make daily sacrifices that sometimes feel like we’re giving up the ease, comfort and financial freedom we deserve.  Through solid mentorship from people we respect we’re reminded that this is the process that everyone goes through as they break away from the American dream and step into true freedom that cannot be bought with cash.

There was a time when I fixed my hair every day, wore makeup, kept a clean house, had what others would call a successfully rising career.  There was very little that others could criticize me for.  I had it all together-for the most part.  Today-if you stop by the farm I’m fairly certain that there would be a long list of things it may appear I ought to be doing.  That’s when I have to dig deep into my own heart, pray to my God, engage my husband in conversation, ask for wisdom from women I admire and then move on as quickly as possible knowing that I’m doing the best that I can do and that as an old woman I’ll look back on my life with no regrets.