My grandmother offered me up big spoonfuls of grace like that.  Ironically, her name was Grace and these spoons belonged to her.  She wanted more than anything for me to consider learning to cook so I could nourish the family she prayed I would one day have.  She sent me recipes, measuring guides and even a bread maker once she had given up on me taking up real domestic measures.  I disappointed her time and time again as I reminded her that “I was getting an education so I wouldn’t have to cook.  Any husband of mine would just have to fend for himself.  I’ll depend on take out and quick meals if I decide to have kids.”  She’d just smile, serve me up my favorite nourishing foods and offer me grace on the side.

This is the kind of grace that brought us to where we are today.  More on that another day, but I can guarantee you that it’s only by grace and certainly not by perfection or traditional professionalism that we’ve been given the opportunity to farm full time.  Instead of being professional I want to be kind, rather than play by the rules I want to be ridiculously giving.  I want to offer unrealistic grace to everyone who supports our farm, works alongside us and especially to my family.  It’s the reason why I devote so much of my time and energy to something that leaves me exhausted at the end of the day.  So that when someone is expecting judgement, shame and a dose of “I told you so” I can turn it around and offer them grace.  It may not make sense and I don’t always get it right, but it’s the way I desire to live.  It’s what I want to teach my children.  It’s the only thing that makes living in this world even somewhat bearable.

In nearly a year and a half of farming full time I’ve always expected that everyone who supports us will make decisions that are in the best interest of our farm and family.  And in all this time I’ve only been wrong twice.  How much time I would have wasted if I had worried for a minute about the two or expected the worst about any more.  I would have missed the good stuff.  The jars of sweet preserves, the coloring books, the treat for our dog and even a cold beer (you know who you are) tucked away inside the return basket.  What if instead of expecting the best I had determined the worst.  Not only would I have been wrong a lot, but I would have a heart full of bitterness and ugly.  Instead, this grace I’m offered and this grace I give fills me up so that I can keep on giving in ways no one deserves.
Grace.

I had to send an email last week that I had been putting off for a while.  A couple of months ago I had made a commitment to one of my favorite local farmers on a trade for weekly shares of milk.  Believing in it’s benefits and thinking that we might not find a new farm this year I thought I would take the time to catch back up on my milk preservation skills-something I had been missing.  The next week we bought a new farm and life just came at me faster than I knew what to do with it.  I’m sure you can guess what happened.  The milk piled up and I just didn’t have the patience to attempt to keep up.  Not only did I have to send an email backing out of the commitment, but I also had to admit that I had more bottles at home than any responsible customer should be accumulating.

I deserved a response reminding me of my commitment, explaining what a burden my hoarding of milk jars had become and a little extra shame thrown in since anyone with a right mind (or knows me at all) could have seen this coming.  But you know what she did?  She offered me grace.  Not just any grace, but grace in big heaping spoonfuls.  Even better than that she said she’s been there and that she understands what my life is like right now.  Her kindness-while undeserved-was welcomed at a time when I really needed it.  Grace. 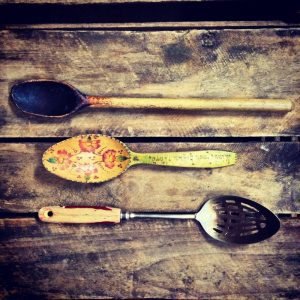